In their cult series of comic novels, “The Obscure Cities”, recently released as a four volume set, illustrator François Schuiten and writer Benoît Peeters bring to life mysterious and fascinating cities from a parallel universe. 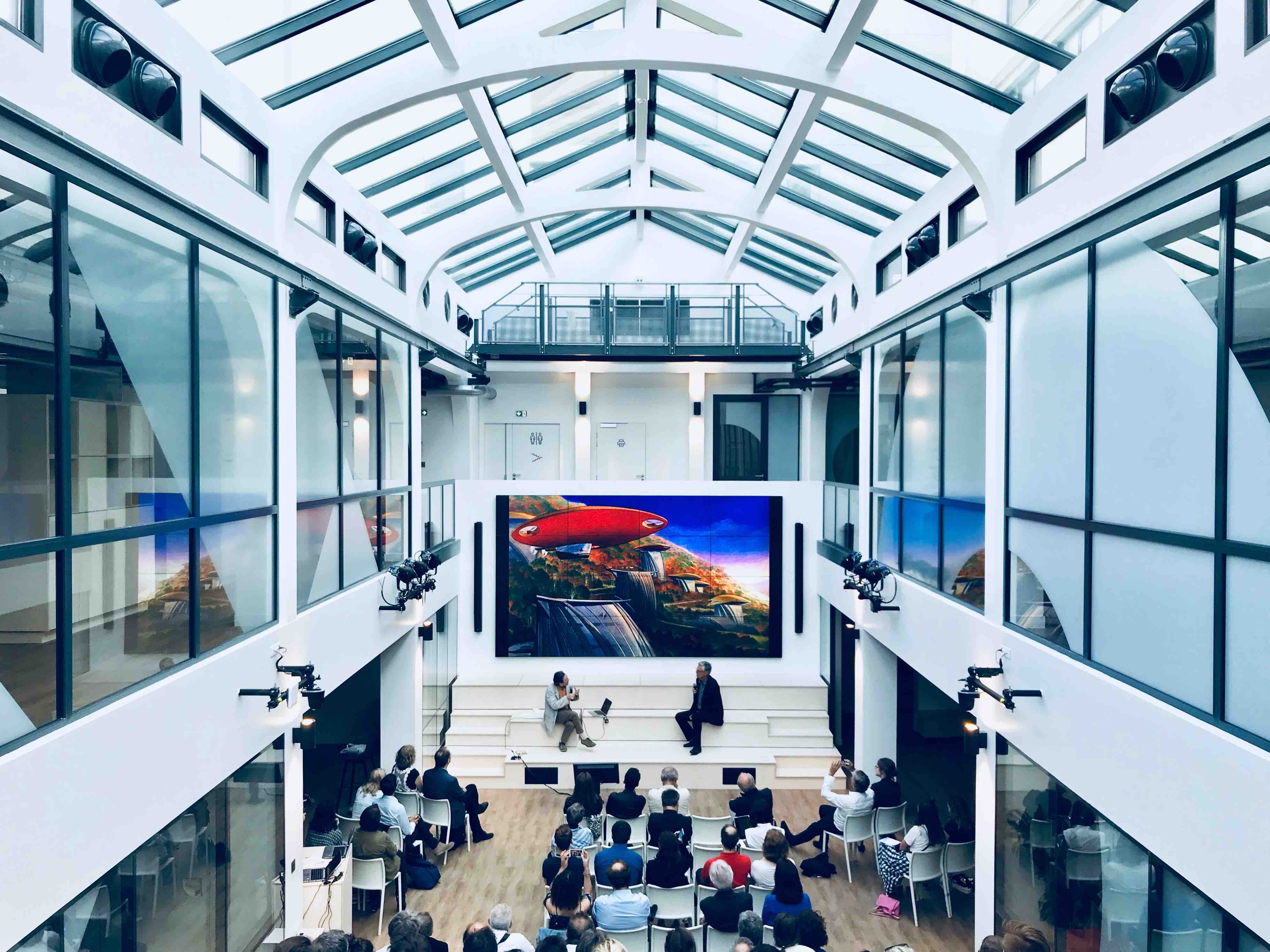 The two authors, whose comic novel “Revoir Paris” submerges readers in a disturbing retro-futuristic Paris, thrive on stories that explore and call into question today’s and tomorrow’s ideas of urbanization. At the opening of the Building Beyond festival, they took a hundred readers on a guided tour of their imaginary city’s downtown. We met them just before; here are the highlights from our conversation.

To quote the title of your conference, how does one travel “from Obscure Cities to future cities”? After all, your works aren’t exactly guides for urban planning.

Benoît Peeters: We have absolutely no intention of trying to tell urban planners and architects how to do their jobs! After all their projects are confined by very different constraints compared to what we do. Our cities are made on paper and follow a completely different set of rules, whether those cities stem from desire or nightmares. They obey the rules of narration, of drama and dream-like freedom, from metaphor to fable. There may well be some similitudes, but we are still storytellers who use words and images; we are by no means analysts.

That said, through our design work, we do occasionally hit upon bits of reality (the Arts et Métiers metro station, or Train World in Brussels in 2015 are examples of this). Still, it has never been a matter of bringing “Obscure Cities” to life.

François Schuiten: It does beg the question of how these tangible projects came out of our work on paper. Today’s cities are begging for a spark of imagination. That’s really why people come to us.

Are you saying that our cities are made in a way that lacks a collective imagination ?

F.S.: Before there was a real place for narratives and theatrics in architecture. However today financial constraints are what dominate and, without considering it a lack of imagination, decision makers tend to discredit narration. The architects are not to blame. Often the narrative aspect of urban spaces is confined to one or two emblematic buildings without being spread across the entire area. Public spaces no longer have a strange or mysterious aspect. We need to demand that there be more useless or non-functional places in cities. Because in a fundamental way the useless spaces are ultimately the most useful, because they open territories to desire and imagination.

B.P.: Functionalism was a very powerful ideology; it has been devalued today but it still has its effect on the way things are done. Le Corbusier and the Athens Charter valued function above all. Today a lack of time and financing creates an environment where all that is left is function. The theatrics, the thought that goes to organizing spaces that is unseen however essential for guiding movement, that which creates desire and animates the flow of people and urban life around new centers… all of that is in danger of disappearing. Functionalism has become lifeless. On the other hand, using real scene setting can create spaces that exist between urbanism, architecture and pure imagination. For example, the Arts et Métier metro station for which the RATP commissioned the decor from François [Schuiten] in 1994, including the walls and vaulted ceiling, fulfills all functional requirements, yet it also provides an immersion in a space that is not strictly functional by any means. The materials, lights and the traveler’s situation all change even if the context remains traditionally urban.

“Functionless spaces are fundamentally the most useful”

How then does one go about recreating the link between dream and reality in a way that brings desire back into cities ?

B.P.: There’s a real difference between old historic cities and new ones: between spaces that are filled with layers of the past and spaces that are about today’s daily life. Quite naturally, historical cities and spaces have a more desirable dimension, even throughout the chaos of history and architectural styles that are less than harmonious when side by side. However, when a new neighborhood is built up from nothing, that is when your question really becomes poignant.

The deliberate act of creating a decor brings to life spaces that haven’t otherwise had time to settle into themselves naturally. Sometimes old cities can use this kind of thing but it is more frequently necessary for new spaces. Often people struggle to fulfil basic functions, leaving little to no means for giving spaces and buildings a little character. It’s the constant battle between “green spaces”, or a drab lawn that only owes its existence to the need to tick a box on a list of project requirements, and the realization of a garden whose creative energy stems from the imagination.

“Those cities are at the crossroads between fiction and function, or between need and desire.”

Do you think that there is a need for grandiose architectural or urban projects for imagination to be able to recapture new urban spaces?

F.S.: It’s true that when they’re done right grandiose architectural gestures can be amazing; they can bring symbolic energy and meaning to neighborhoods, and even provide the core of their identity. They have to bring perspective. But it isn’t an issue that can be looked at separately from broader issues such as the integration diverse populations, the evolving ways that people work, or the environment. Our stories don’t only talk about urbanism; they are more about how broken society is. What we were looking to do in “Revoir Paris” was to push certain dynamics to the point of cataclysm. For example, we pushed to an extreme the idea that some cities run the risk of becoming city-museums by encapsulating the center of Paris under a glass dome.

B.P.: As an example, the « Grand Paris » project has been a big inspiration for urban planners and architects, and some really interesting things came out of it. But then what? There seems to be a sort of bittering effect now. The true scale of what is at stake does not seem to have been taken into account. The big risk in contests for ideas or concepts is that they end up diminished due to a change in political majorities or financial restrictions, but also because maybe the initial idea was really to create a buzz that would be strong enough to inspire 10, 20, even 30 years of real urban transformation.

Do you think there are to many barriers for real urban transformations?

B.P.: In Europe especially, there’s a sense of a swift clamp down, due to lack of budgets but also a lack of long-term ambitions. Cities have started fragmenting because power in and around cities has also become fragmented. Until someone can solve the problem that comes from layers of decision-making, there will be no holistic reflection around the “Grand Paris”. Political dead ends exist today that make it virtually impossible for that to happen.

F.S.: Brussels is a perfect example of bureaucratic complexity pushed to the extreme:  dense layers of bureaucracy and inertia block any kind of real vision. But good models do exist: in Rotterdam, The Hague and Copenhagen, people are successfully thinking of those cities holistically. Environmentally speaking, those cities are able to have a real vision and will power.

B.P.: Those cities are at the crossroads between fiction and function, or between need and desire. Their projects turn the cities more enjoyable spaces and solve real problems all at the same time.

“We are not in the business of dreaming up the ideal city! That is definitely one responsibility that no one will ever confide to us, and we certainly don’t want it either!”

What can fiction bring to rapidly mutating urban landscapes ? Do you think it can create new imaginary ideas, beyond the idea of intelligent cities?

F.S.: Some innovations are extraordinary and even troubling at times. There needs to be some kind of resistance. Imaginative illustrations and stories are one way to look towards and ponder the future. Our first comic novel, “The Walls of Samaris”, is about a character who is in the middle of a moving city that is artificial and in reality empty. The city is invented for that character. It is a metaphor that continues to resonate with us today: the idea of simulations is omnipresent. That’s why we invent stories: to catch hold of our intuitions and weaknesses.

B.P.:  In some ways today’s fiction describes a future that is already upon us. If series like “Black Mirror” fascinate us so much it’s because they are so close to our reality, whereas movies like “Blade Runner” or “Minority Report” were written around very distant elements that could never really come true. We are somewhat helpless in the face of this technological acceleration, but it is useful to recall that the future never unfolds in the linear way that we imagine it does. We generally imagine a future that accentuates aspects of the present, but we can always create other kinds of futures. Don’t forget that history operates around crises, or brutal accidents, by slow-downs and unexpected inventions. For example the massive trust we have in today’s digital networks could suddenly disappear. In “Revoir Paris” all means of digital communication have disappeared. To understand what Paris is like, our heroine has to rely on a few photos and books from the old world that miraculously survived. Imagining a future that has “crashed” and is non-linear, it gives way to new options for imagining the future of cities.

What kind of future cities do you dream about ?

F.S. : We dream about imaginary cities where we can create new characters and create new stories. Some of them seem desirable, despite their strangeness. Others are more nightmarish, even if they have a few beautiful aspects, strengths and contrasts. We are not in the business of dreaming up the ideal city! That is definitely one responsibility that no one will ever confide to us, and we certainly don’t want it either! 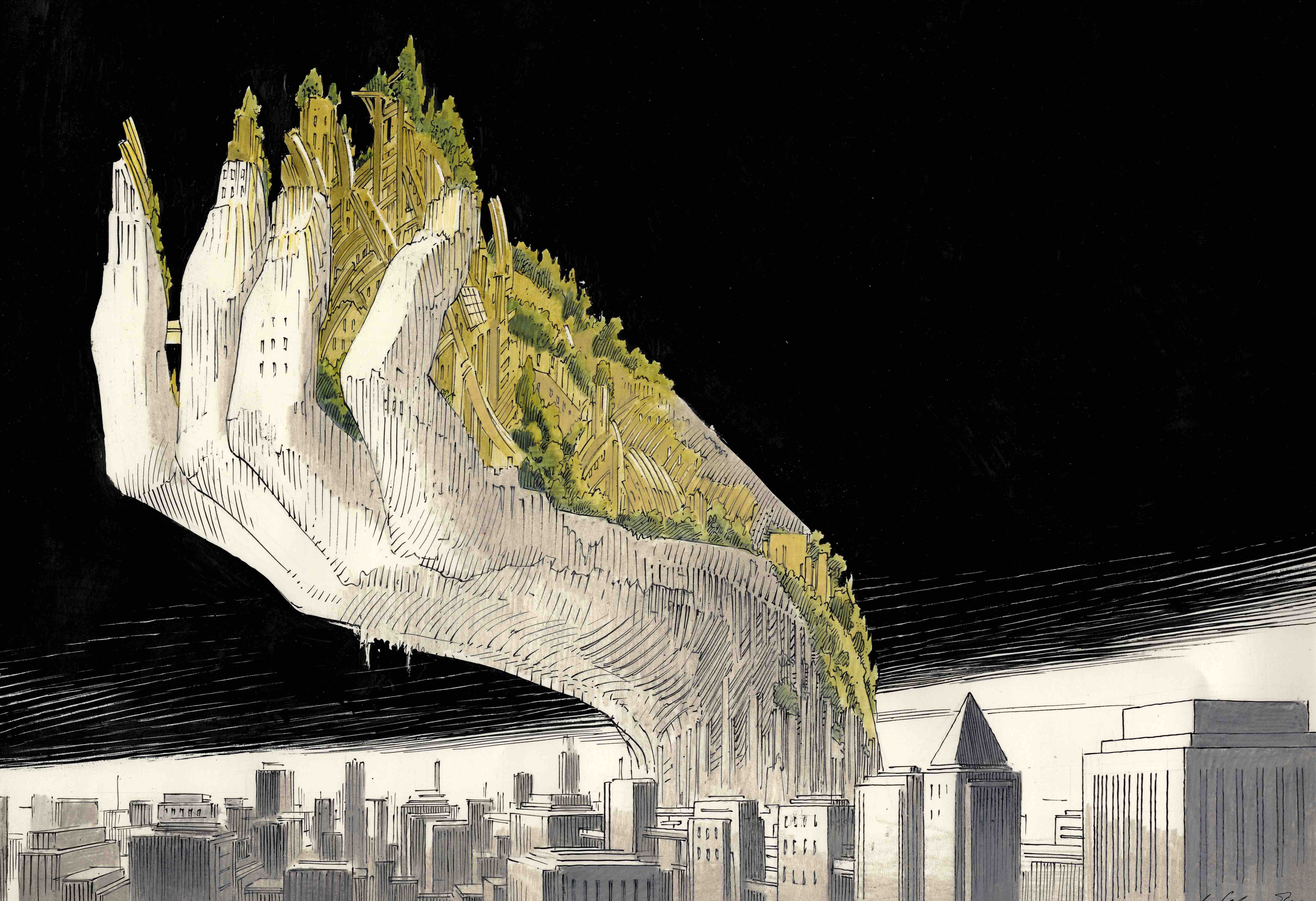