Long-lasting, eco-friendly, autonomous and resilient. Sustainable cities could be described in all these ways. All that remains is to define the urban model to make them possible. Should we be reinvesting in existing buildings? Or, ironically, should we put our money on new types of temporary housing which are by definition non-sustainable? This debate closed the third edition of Leonard’s Building Beyond festival dedicated to future jobs in cities and regions, which took place on 2nd October in Paris.

This period of climate crisis, doubled with the health crisis, reveals the fragility of megalopolises that we previously believed were unshakable. When cities aren’t under threat from the elements (Stockholm’s coastline is rising, while Bangkok and New York are under threat from rising sea levels), their capacity for resilience suffers due to their heavy economic dependence on the outside world.

Making cities “sustainable” is now an urgent priority. The word is certainly en vogue, but how do we put it into action against these challenges? “Cities are clinging to a model of creating a paradise on earth,” observes writer AurélienBellanger, who introduced the event. “The carbon and oil empire is coming to an end at a time when structures inherited from the 20th century will last for another 2,000 years.” Nevertheless, solutions that bend the model and give cities a more human and livable dimension do exist. Have we laughed enough at the wisecracking idea of moving cities to the countryside? The non-profit HameauxLégers thinks not, as it cuts into the urban landscape with its eco-neighborhoods.

“A lightweight hamlet is a community of people living together in reversible homes, built in harmony with the local environment,” explains Aristote Truffaut, the non-profit’s creative director. Considering that housing is now the biggest offender of land take (in France, 9% of the country is now concerned by land take, and this amount will double by the end of the century), the foundations are made from temporary, non-destructive structures. The French ALUR law of 24 March 2014 allows this type of housing to be off grid and to develop in relative autonomy. Sustainability combined with concern for environmental issues provides “access to communal lifestyles,” underlines Aristote Truffaut. 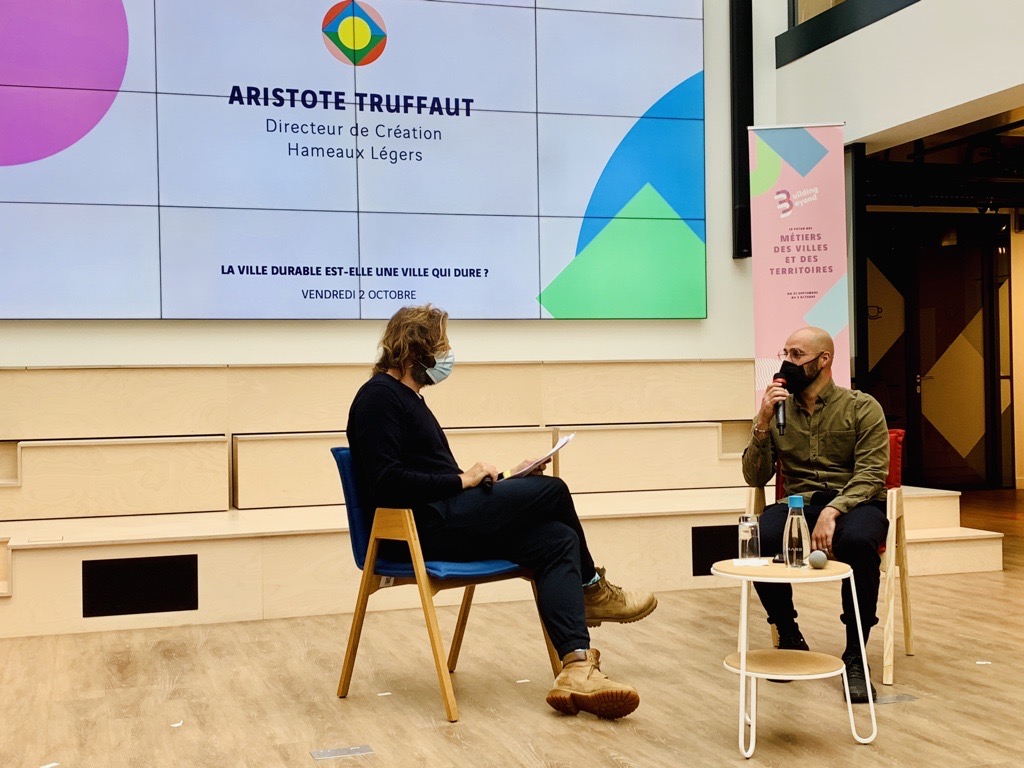 From 2015 to last September, Les Grands Voisins project was driven by the same ambition. This village within a city was home to charities, daytime shelter for asylum seekers, second-hand shops, outdoor cafés and other cultural activities. In this instance, the project took shape in an existing building – the old Saint-Vincent de Paul hospital which covers 3.4 hectares of land in Paris’ 14th arrondissement. Around 2,000 people lived and worked there, while 1,000 people were provided with temporary emergency shelter and 600,000 visitors made use of the public amenities annually. “Les Grands Voisins ‘de-gentrified’ a well-off Parisian neighborhood. The developer’s job doesn’t just stop at designing the building,” says architect Cécile Baranger, who was in charge of coordinating partnerships for the project. “These kind of places spark a sense of community, but we never deliver a completed project.” Does that mean when something is ephemeral it ironically makes it long-lasting?

As head of research and innovation at PCA-Stream architects, Étienne Riot is counting on different options coexisting. The environment must be taken into account in order to achieve a zero land take objective. “Either you take an existing building and make it sustainable by bringing it up to standard. Or, you build from scratch using processes and techniques that guarantee what is being built is sustainable.” Another requirement that lies in innovation-driven sustainability is multi-functionality. The architect gives the example of a building project lead by PCA-Stream in Paris’ 17th arrondissement. “We know that this building’s functions and the activities it hosts will evolve. We’ve anticipated that change in its structural design.” These new designs come up against “financial and regulatory barriers”, laments Étienne Riot, leading Cécile Baranger to add that “laws remain unsuitable for this type of project”. 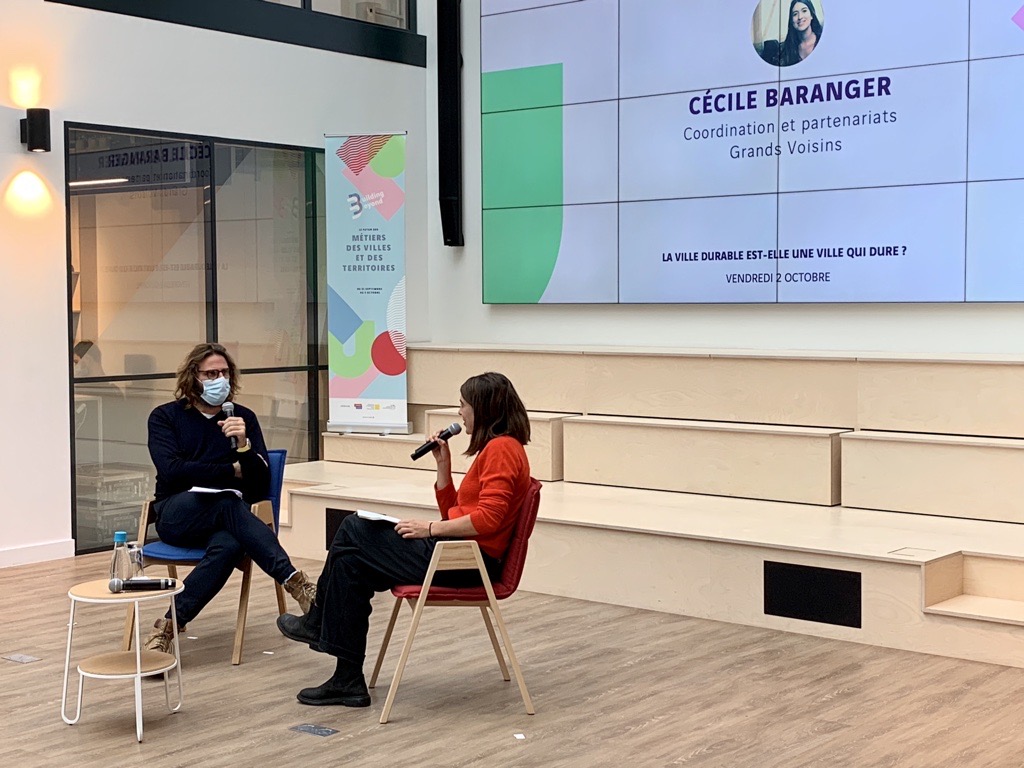 For Elisabeth Laville, founder of Utopies, urban sustainability will be played out in the political choices made on a larger scale. “The issue initially concerned a building’s technical element, then its function and finally its environment. Today, the resilience of cities is what’s at stake.” The current health crisis has emphasized this: in France, on average only 2% of what is consumed in urban areas comes from said area. “We have to identify economic leaks and needs that are not met by onsite production.” The political choice would already entail going modular. “For example, by integrating a hospital unit in an apartment building,” recommends the expert.“More broadly, it is about reviving the local economy in order to ensure a city’s autonomy.” Gradual relocalization in increments of 10% could allow ” local and global to combine.” And to make this happen? We must bring back to life urban territories that we once thought lost. 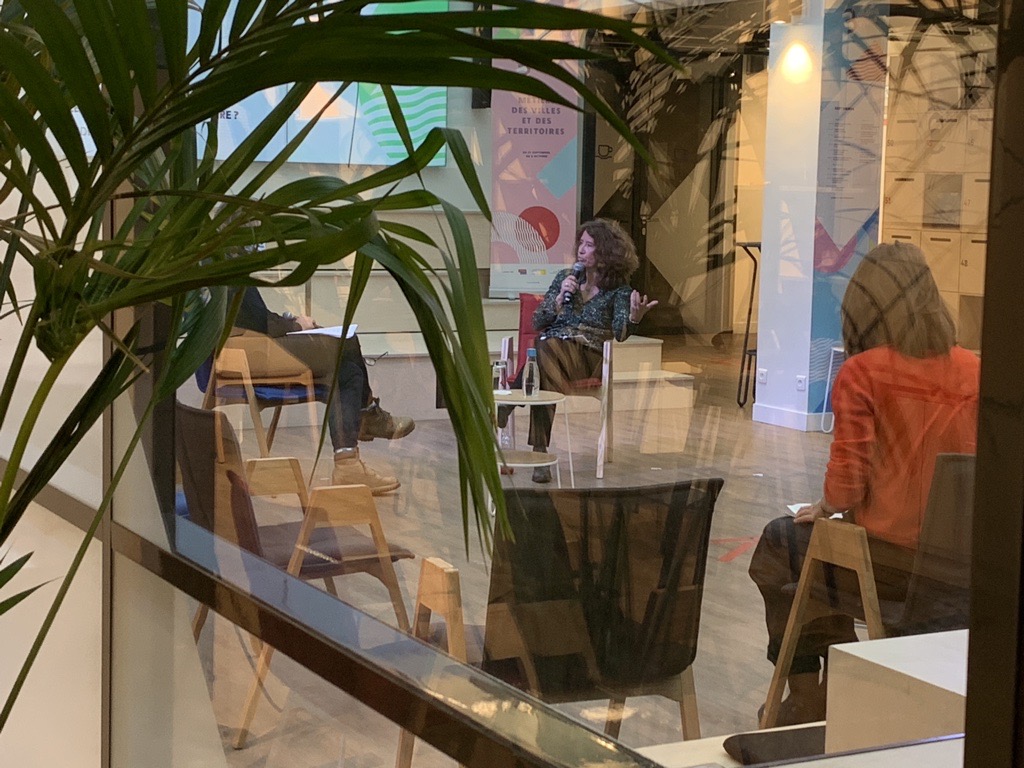