From architecture to protecting the natural habitat, via work site supervision management, we take a look at the emerging trades in the “smart city” and the building and construction industry with seven different players leading the way in this rapidly changing sector. 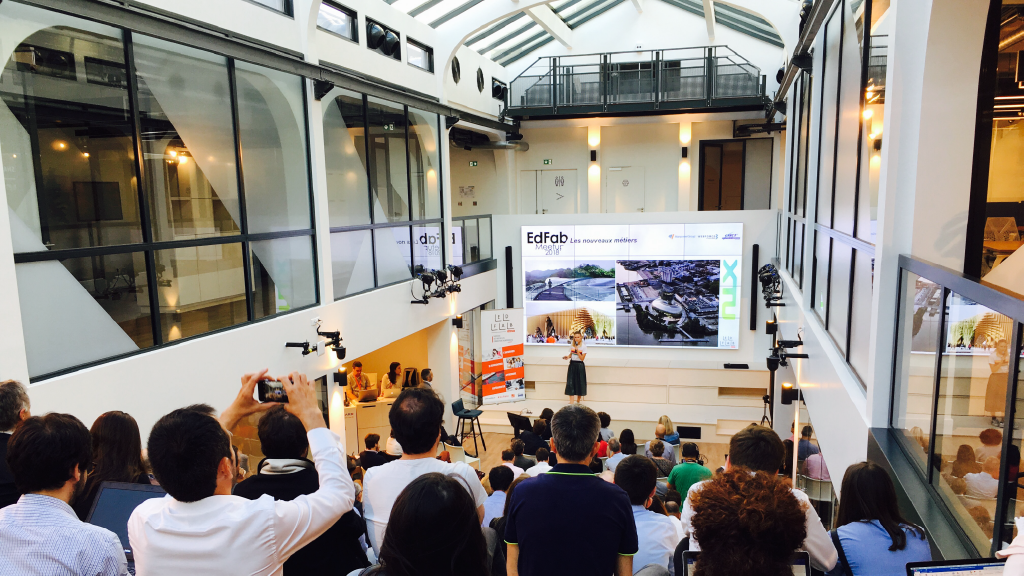 When the building trade is thriving, everything is thriving, or so the saying goes. Judging by the most recent employment figures in the sector, everything’s not so bad at all. In any case, that’s the analysis given by Nicolas Maillet, head of the construction industry market at ManpowerGroup France, who is a partner of the EdFabMeetup. The meetup’s sixth edition entitled “New jobs in the smart city and the construction industry” was organized by the Paris Region Innovation Cluster Cap Digital at Leonard:Paris, as part of the Building Beyond festival.

The numbers are promising: over 12 months, the recruitment of temporary workers has increased by 13.6%. Meanwhile, the number of employees in the sector indicates a 2.6% rise. In the building trade, everything is thriving…. but, everything is changing too!

The building trade may well have a reputation for being a sector where things take time -where the building site reality, the scale of financing and the complex tooing and froing between actors all bring things to a standstill, but it’s also witnessing its professions being reinvented by the digital transformation and the rapid developments in automation.

Benjamin Gans, who is director of EdFab, the Cap Digital entity that’s dedicated to change in education and employment, recalls the report from McKinsey consulting firm, which explained that in all sectors combined and throughout the whole world, 40 to 60% of occupations could become automated by 2030, 375 million people may need to switch occupational categories, and 400 to 800 million jobs could disappear. Above all, according to the same report, 60% of jobs are yet to be invented.

So what will happen to those in the construction industry? What sort of profile will smart city builders have? Seven industry professionals who already have one foot in the future presented their responses up on stage at Leonard:Paris.

To take the pulse during times of change, there’s nothing better than looking to what’s going on in the field. Those with a watchful eye on current work sites will have already noticed that building shapes are becoming increasingly more daring. These structures are taking the liberty to have more voids than solids. Except that building such complex shapes demands substantial resources – on both a manpower and materials level. 3D-printing and robotic arms borrowed from the automobile industry have provided some answers for construction sites. And that’s exactly what the startup XtreeE is doing. For its co-founder and managing director Alain Guillem, the future of construction sites must pass through the hands of “senior engineers in technology and market development.” In other words, 3D-printing specialists doubled with materials science experts who know the issues facing operators like the back of their hand, giving them the solutions to safer, more efficient construction sites, and even being capable of making their most inventive visions come to life.

The smart city is calling out for the smart building. Who will build this nervous system? Electricians turned systems architects, says Stéphane Couturier, director of SNEF Connect. With over a hundred years of experience, specializing in providing electricity for buildings, the group is heading for a future where traditional cables will be a thing of the past, in favor of IP networks that transport energy and information. Those LEDs that light up your office…. Yes, they’ve got an IP address! Electricians of the future will be well versed in computer networks. Proof if ever it was needed, signals Stéphane Couturier, just look at Google, who is investing in the smart city with its branch of SideWalk Labs.

The closer you get to the work on site, the more radical the changes appear. But first, let’s take a step back. Before starting to build, you need to identify, measure and take notes. The job of a surveyor would be the “second oldest job in the world,” jokes Thomas Nallet, who nonetheless willingly accepts the tile of “surveyor 2.0”, and confirms that his profession has been radically transformed over the past few years. Indeed, if he was once the “topographic manager” on a construction site, today he’s the director of Lidar photogrammetry operations at Sixense Mapping. In plain English: nowadays, construction site readings play it out in the air via Lidars (remote sensor tool that uses laser light) that are embedded in drones flown remotely. And on top of everything, readings from linear construction sites that span hundreds of kilometers can be made in a few days, accessing difficult zones without any danger. While, the use of digital binoculars provides readings with such detailed resolution that allows you to guarantee the financial and operational aspects of the worksite. Thus, today’s surveyor has become a remote drone pilot, an expert in digital image processing, 3D modelling…

For that matter, modelling is one of the main changes in the sector, opening up whole range of new jobs. “Smart” cities and buildings are designed in 3D down to the smallest detail, and interactions between all evaluative systems are in silico. That’s the aim of BIM, or Building Information Modelling, and it’s one that’s made up of multiple components, from strategic support to monitoring compliance. Daphné Dureisseix, head of the Project BIM – BIM Engineering department at VINCI Construction France, points out that today, this translates as the roles of a BIM Manager, BIM Modeler, BIM Reviewer…. These are roles whose shape is constantly evolving, as technology is making headway ever faster.

Digital mockups produced by BIM specialists are also a precious source of data for understanding energy consumption and harmful emissions. Coupled with data collected in real time via connected sensors, they also enable Energy Managers to identify actions to be carried out on a building so that it complies with environmental objectives set to its construction. This is the job of Amah Jean Abaglo from Openenergy, which involves closely monitoring developments in the sector, where technology and practices progress so fast that training programs on such matters can’t keep up.

Buildings are more daring, and designed, managed and ran more efficiently for a better control of security, costs and energy. The changes are radical, yet not all are due to digital technology.

Beyond its outer shell, a building must also limit its impact on the natural habitat. However, this is nothing new, as protecting and restoring habitats impacted by a new worksite is an already well established practice. What is even newer, however, is the ambition to push this reasoning to the limit, by restoring those habitats affected by old structures. And this is something that Gwenaël Scotet, head of ecological restauration works at Equo Vivo, the new branch from VINCI Construction, develops. Ecology researchers, engineers and ecology technicians are developing solutions to give wetland and green infrastructure back to nature, to protect biodiversity and to ensure species can roam free.

The ideal is that consideration should be made for integrating constructions into the natural habitat, straight from the design phase. Nowadays, you’ll find this ideal a reality in architects’ practices, such as with Ariane Lenhardt. As head of R&D, construction and sustainable planning at XTU (who are particularly renown for their green facades that incorporate microalgae between glass partitions), she is an agricultural engineer by trade. After following a specialization in urban green space engineering which was tailored for people like her, who wish to bring cities and nature closer together, by investing in eco-construction, urban agriculture…. and being convinced that the future of the construction industry will be just as much about low tech as it is about high tech.