A new relationship is brewing between supporters of the two energy storage technologies – hydrogen and battery power - that are destined to propel electric vehicles. These well-documented trends may be opposites, but their development is complementary: battery power for personal use in urban settings, while hydrogen would better be suitable for long journeys, fleet vehicles, HGVs… All that remains is to solve the simple matter of infrastructure, which is vital for driving demand. 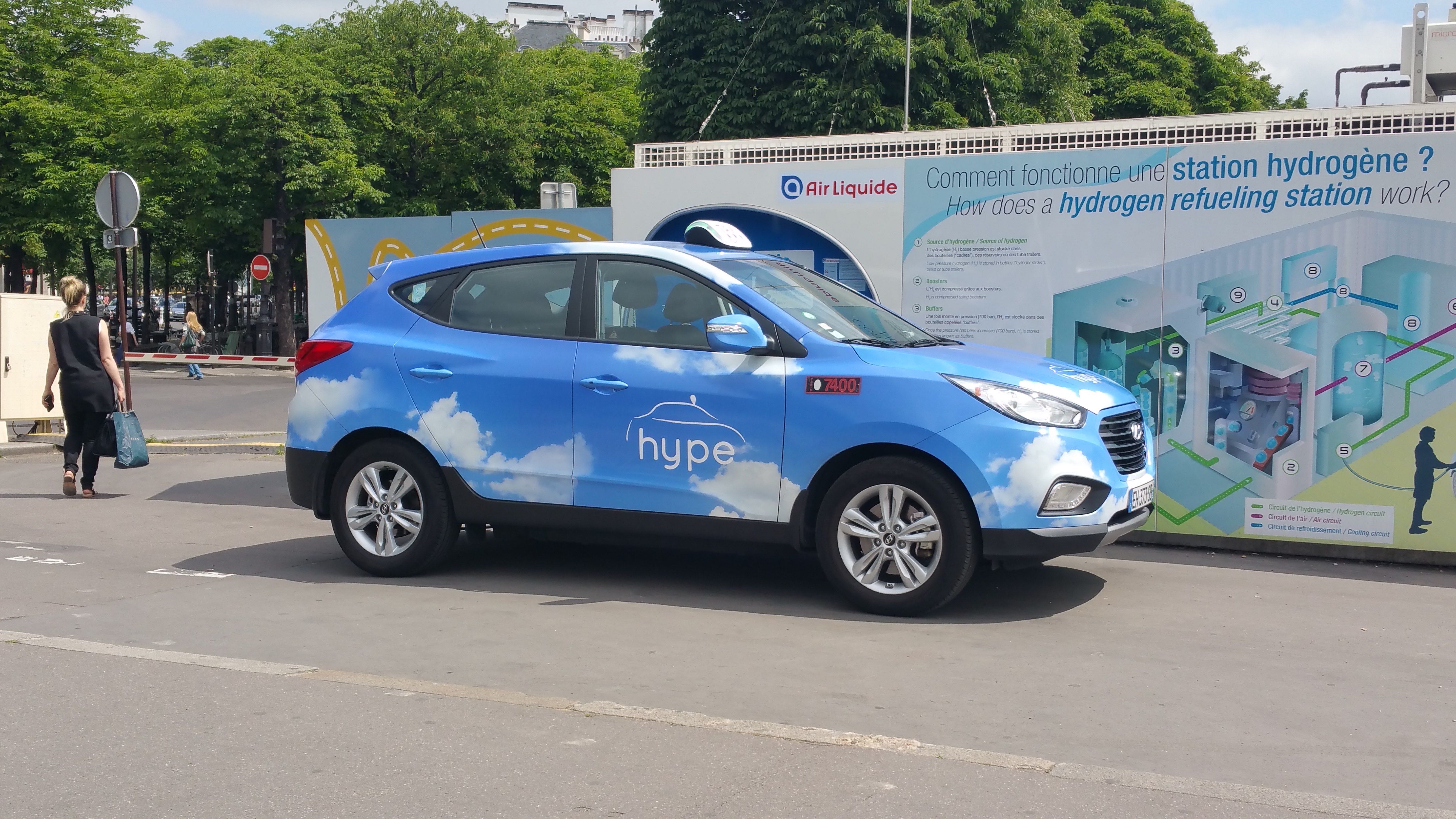 “Hydrogen is an incredibly dumb [energy].” This one sentence, uttered in 2015 by Tesla CEO Elon Musk, sums up the fratricidal duel that electric mobility manufacturers have engaged in, pitting hydrogen fuel cells against battery power for the past several years. Yet while initiatives in the fight against pollution and climate change are increasing, both technologies have solid arguments. Those championing either camp are Tesla, the jewel in the Silicon Valley crown and battery powered car market player; and the Japanese giant Toyota, who backs hydrogen cars with its Mirai model.

Reuters estimates that “investments in electrified vehicles announced to date include at least $19 billion by automakers in the United States, $21 billion in China and $52 billion in Germany.” In France, the total cost of funding necessary amounts to around 25 and 35 billion euros from now until 2050. On a worldwide scale, it’s claimed that $2.7 trillion is required for the construction of charging infrastructure that could support 500 million electric vehicles.

While these figures are mainly outlined for battery-powered electric vehicles, the same also applies for hydrogen fuel cell electric cars. In fact, General Motors is about to launch 20 new electric vehicles from now until 2023. While the two technologies have been going head to head for the past few years, they’re not so different – and could even complement one another.

Due to the battery weight and size, battery-powered electric vehicles are better suited to short journeys for privately-owned vehicles. As for hydrogen, it stores more energy using a system that weighs less, making fuel cells effective for vehicles carrying a heavy load and covering longer distances. When Air Liquide CEO Benoît Potier was on the France Info radio show at the beginning of 2018, he judged that: “The starting point for the hydrogen market will be more focused on professional modes of transport, like buses, trains and trucks, rather than ordinary individual cars.”

In a recent report from McKinsey, they explain that hydrogen fuel cell cars would be more effective for transportation systems. McKinsey goes on to develop that: “South Korea plans to convert 26,000 buses to hydrogen, and Shanghai alone plans to purchase and operate 3,000 fuel-cell buses by 2020.” In France, a €100 million national plan dedicated to developing hydrogen-powered electric vehicles was announced on 1st June 2018. The aim of the plan mainly targets freight vehicles, persuading businesses to purchase 5,000 light utility vehicles and 200 heavy vehicles from now until 2023. The American group Anheuser-Busch recently announced they are going to use 800 hydrogen-powered trucks for delivering their goods. Captive fleets are also being seduced by this new fuel. In the Pyrenees, €15 million has been invested in the Hyport project, rolling out hydrogen-powered electric vehicles across the Tarbes-Lourdes-Pyrénées airport.

One sector where innovation is abundant is in the rail industry. In Germany, Alstom have developed a train that runs on hydrogen fuel cell power. The French company is due to deliver 14 models by the end of 2021 in the Lower Saxony region. A few weeks’ ago, the first prototype, named Coradia iLint, got the green light to ride in Germany. Not only can it transport 300 passengers at a speed of 140km/h, but it can travel 1,000km before needing to be refueled.

As the clean energy provider Ballard Power Systems recently explained, one of the advantages of hydrogen is that it doesn’t require electrification infrastructure. Hydrogen trains generate their own electricity from its own hydrogen fuel cell. Costs are pretty much identical to those of traditional trains, however, hydrogen trains have zero-emissions –  producing water only. Recharging the battery is also faster than recharging electric batteries.

Innovation isn’t only restricted to trains. On the 27th October, Ballard Power Systems announced in a press release that the world’s first hydrogen-powered tramway was being trialed in Tangshan, China. Could this be a new market to conquer…?

Recharging infrastructure, a both crucial and challenging issue

In a previous article, we gave an overview of the changes required for large-scale deployment  of electric vehicles in a city. The use of hydrogen and electricity are complementary in nature, which results in a symbiosis of infrastructure needs.

Designed for short journeys and within cities, electric-power requires a dense network of charging stations.

In suburban areas, the solution may be found in homeowners’ properties. For example, in Sydney, fewer than 10% of cars travel more than 100km a day. Therefore, the large majority of vehicles will only need to be charged once, when at home during the night. Tesla’s promise that “You will wake up to a full charge every morning” is looking likely with the brand’s wall connector.

Big cities appear to be banking on their parking lots. Shared, autonomous cars that are designed to be (almost) always on the move will make parking lots partly obsolete. Do we really imagine that they’ll be transformed into charging zones? Some architects are already designing reversible parking lots, and the New York Times dreams of parking-free university campuses. Outside urban areas, the conversion of traditional car parks has already begun.

TOTAL already counts 65,000 electric vehicle charging stations in 25 different countries across Europe (of which 8,800 are in France), and more that 50 TOTAL petrol stations are already equipped with fast-charging stations. Existing service stations are a promising playground of the hydrogen market. With a higher autonomy and designed for heavy loads and longer journeys, hydrogen power must invest strategically in places outside the urban network.

Japan is a pioneering figure in its desire to become the “hydrogen society”. Since 2016, the country has opened 100 hydrogen fueling stations, and hopes to open 1,000 by 2020. However, “We’ve had trouble finding enough free space in cities where demand is high,” explains Tetsufumi Ikeda, the managing director of the Association of Hydrogen Supply and Utilization Technology (HySUT). “The cost of land is expensive, and this type of installation requires space.”

Air Liquide supplies Hype’s 100-strong fleet of hydrogen taxis, and is targeting transfers from airports to homes. They have installed their first two stations at Orly and Roissy airports. The French fleet already has 18 stations operational throughout the country, and will be boosted by the national program, which aims to have 5,000 vehicles on the roads by 2023. However, in France, a whole host of strict charges surround the set up of charging stations, such as recommending that only upper floors of parking lots can be equipped with, in order to prevent the risk of fire.

A hydrogen fuelling station requires stocking spaces and machines that can compress, cool and liquefy gas at -40°C to fill the tank. In Japan, “The security standards and distances imposed mean there must be eight meters between the road and other distributors,” explains Fuminori Yamanashi, head of infrastructures at HySUT. “It’s more complicated than a traditional petrol station, as numerous controls are required to avoid a catastrophic scenario with a reservoir explosion.” A fortiori for a country where seismic risks remain high.