At a suffering city’s bedside

The Covid-19 pandemic has brought the question of public health risks back into the spotlight. We’re entering a new stage in the long history which unites urbanization and major epidemics. This time round, healthcare workers, epidemiologists and ecologists are finally coming together to provide solutions to the epidemic risk – and other professions are merging to respond to chronic illnesses related to urban lifestyles. Leonard opened the floor to a diverse panel of speakers, to find answers to the following question: what is the city suffering from and how can it be cured?

A field of urban ecology

Serge Morand is a health ecologist at CNRS (the French National Centre for Scientific Research), Cirad (the French Agricultural Research Centre for International Development) and the Tropical Diseases faculty at the University of Mahidol in Bangkok. Live from Thailand, he opened up the debate by first explaining that this is not a new issue. From the Plague of Justinian to cholera, via the measles endemic which first spread to humans from cattle, cities have always had to deal with illnesses. The unprecedented scale of the current situation is firstly due to the volume of international trade and the number of concentrated urban centers. These are favorable conditions for pathogens to emerge – and not only be limited to an epidemic scale.

Apart from recent developments, urban health concerns mainly“lifestyle” diseases, such as cardiovascular disease or obesity, and not forgetting strictly urban problems like noise and air pollution. Now the context is set, Serge Morand defends an optimistic vision, one based on ecosystem services provided by nature in the city. A quick detour via Singapore shows us that the South-East Asian megalopolis has created therapeutic gardens, imposed that every hospital window must overlook vegetation, and plans to create public green spaces to ensure that all residents live no further than 200 meters away by foot. “Singapore and Hong Kong are very green cities. Despite both having a high population density, their epidemic rates are a lot lower than neighboring cities like Hanoi, Bangkok or Manila,” the researcher explains.

Back to the stage at Leonard, and the speakers reflect on the political aspect of urban health issues. Simon Davies, vice chair of Foundation AIA and head of Studio Environnement AIA Partners, discusses how the issues touch a whole variety of areas, beyond the Covid-19 crisis. “The epidemic we’re currently facing questions as to what characterizes our vulnerability as urbanites. As such, we must recognize that health should be a priority in all new urban projects.” Charlotte Marchandise is an expert at WHO, a former councilor in Rennes and the former chair of WHO’s French Healthy Cities Network. She believes that health is, first and foremost, a political choice. “There is relatively little individual choice on such issues. If there are two smokers who both want to quit, the one who lives more than 50 meters away from a tobacco shop is twice as likely to succeed!” In the same vein, Chloë Voisin-Bormuth, director of studies and research at Fabrique de la Cité, points out the risk of a lifestyle drift: “Do we still have the right to choose to have poor urban health? Is health still an individual thing? There is a rather paternalistic notion to urban health.” 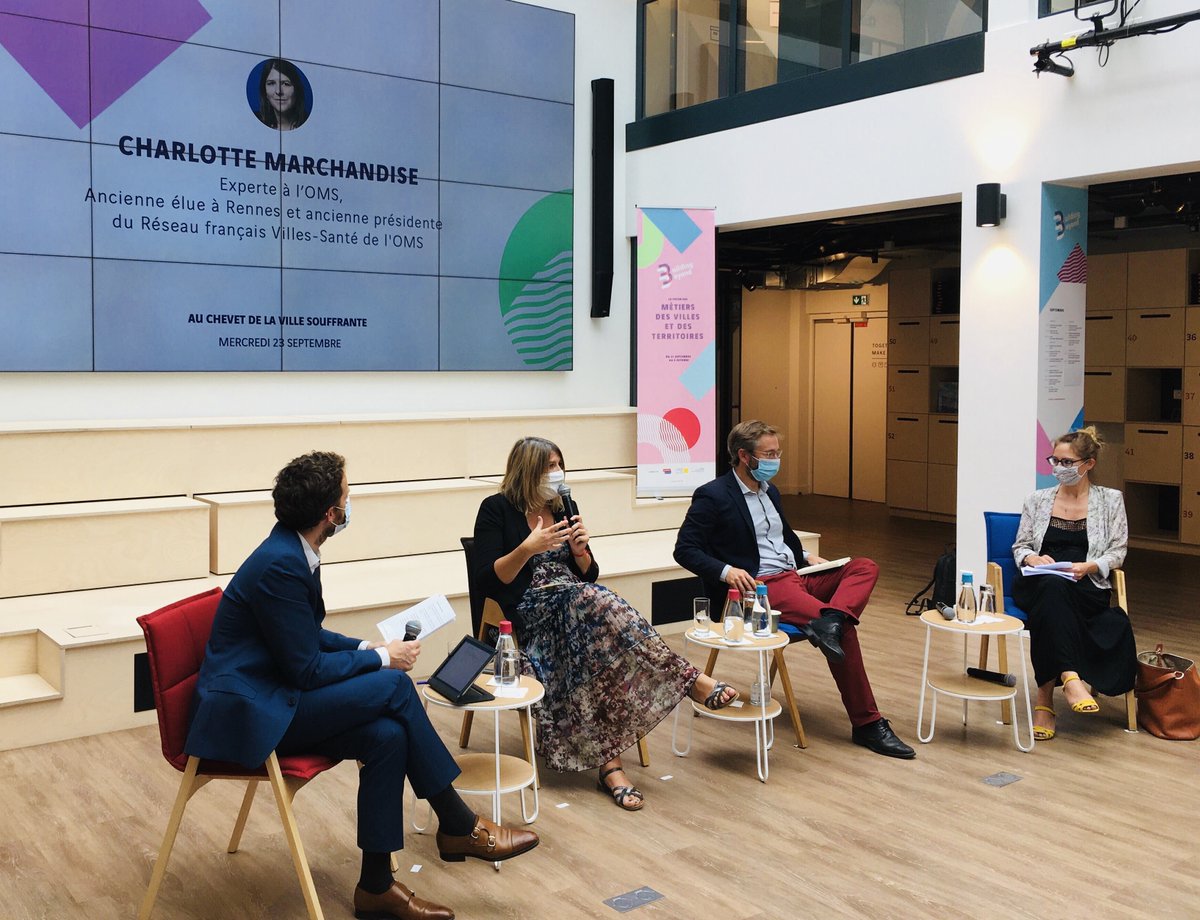 For all the speakers, the issue of urban health must be looked at from the root, or rather, right from the start of a building or urban planning project’s design phase. Charlotte Marchandise takes us to Rennes to explain the development processes behind a “model” school. Health is placed at the center of the building’s design, from designing a smart building layout in relation to road traffic, how each space promotes physical activity, well thought-out greenery and the choice of materials used. Simon Davies goes on to provide some Anglo-Saxon examples. The Maggie’s Centres in the UK are healthcare spaces for cancer patients. They are built around four simple principles: have a connection to nature, have a reception area that includes an open kitchen area, and provide cancer care… “What’s interesting to see is that a variety of different buildings have been designed from a simple set of specifications which puts health determinants at the center,” says Simon Davies. On the other side of the Atlantic, San Francisco’s Parklet program is a good example of “tactical urban planning, or urban acupuncture, which offers both rapid and temporary interventions in neighborhoods.” The project basically converts unused parking spaces into neighborhood amenities that promote health and which are co-designed at a municipal level. 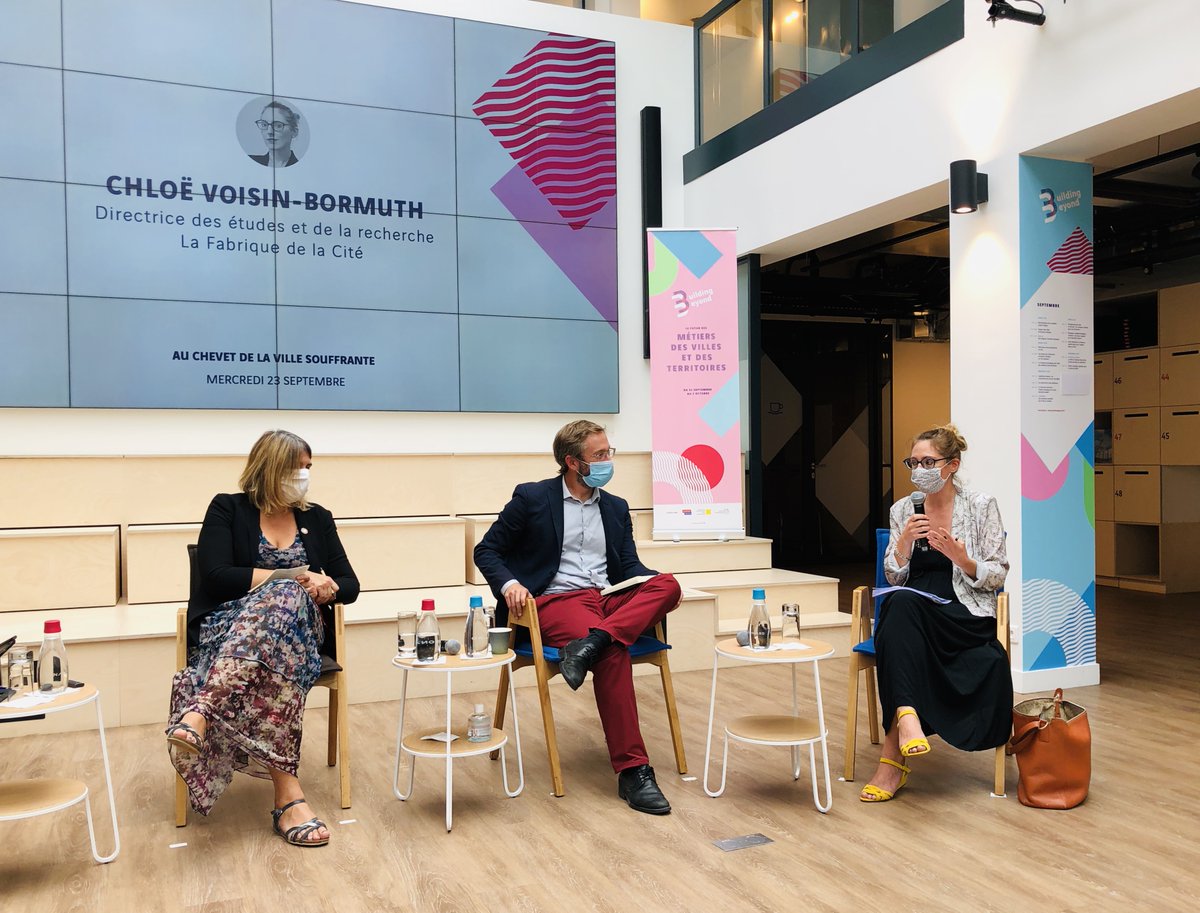 To conclude, Chloë Voisin-Bormuth reminds us of a fundamental challenge for cities: the need to restructure the landscape of actors involved in environmental health. “A doctor’s role can be called into question, the city is taking on new responsibilities, those in the construction industry must integrate the topic into their project specifications, digital companies are taking action on the topic of data, insurance companies are looking to adjust their premiums by acting directly on health, and finally, residents who were ‘patients’ now become actors of change and experts…”