Population pressure, affordable housing crisis, fed up with individualism…. What if the time has truly come to knock down the walls when it comes to housing? 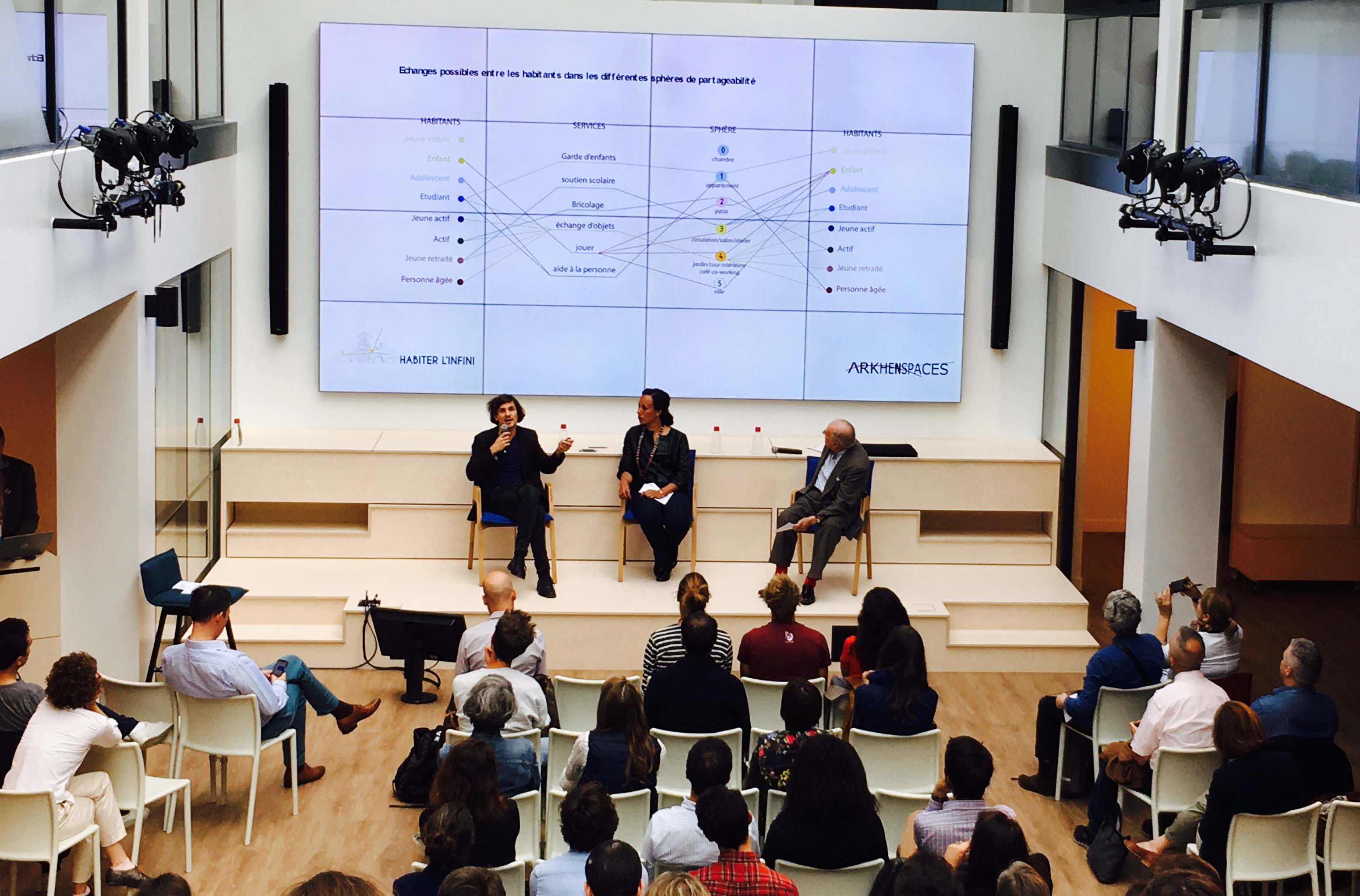 Your favorite community manager is your concierge. Equipped with your “digital compass”, you’ve learnt how to stretch the space out, so now your 50-square-meter apartment has transformed into an 800-square-meter loft. Thanks to your 15 flatmates with their multi-starred ratings on Airbnb, your property is self-financed. Ever since discovering co-living, individualism attributed to modern-city dwellers seems out of place and from another time.

A waking dream? A post-modern utopia? Or rather, a reality well underway. A “previously experienced alternative”, as sociologist Michel Maffesoli put it when he featured at Leonard:Paris’ Building Beyond festival, in discussion with the architect Eric Cassar from Arkhenspaces, and entrepreneur Caroline Reminy, head of BIM engineering at VINCI Construction France.

“Living differently: new practices, new economic models”. This was the theme that brought them all together on June 13th, and all three manifestly agreed on one essential point: at the beginning of this century, living differently is about inventing new ways of living with others. And Eric Cassar takes this belief further – a lot further. His “Endless Home” concept suggests pushing the boundaries of self-contained accommodation, to create “shared, communal and affective” housing, in which – apart from one’s own private space – each inhabitant or family would have shared areas at their disposal, like a patio, meeting rooms, dining rooms, kitchens…. according to their needs. Numerous spaces available for tenants all under one roof (or a “block”), that can be reserved via a “digital compass”. Or rather, an app that connects inhabitants and physical spaces, one that’s fed on data from sensors spread throughout the building, so function and demand can be allocated to everyone’s needs.

“Space is becoming flexible, it’s defined in real time by digital technology, and so everyone has the impression they live in a 1000-square-meter space,” sums up the architect. The concept is based on one major factor: just like private car ownership, where thousands of new mobility apps encourage a sharing economy, the shared use of self-contained accommodation remains low. 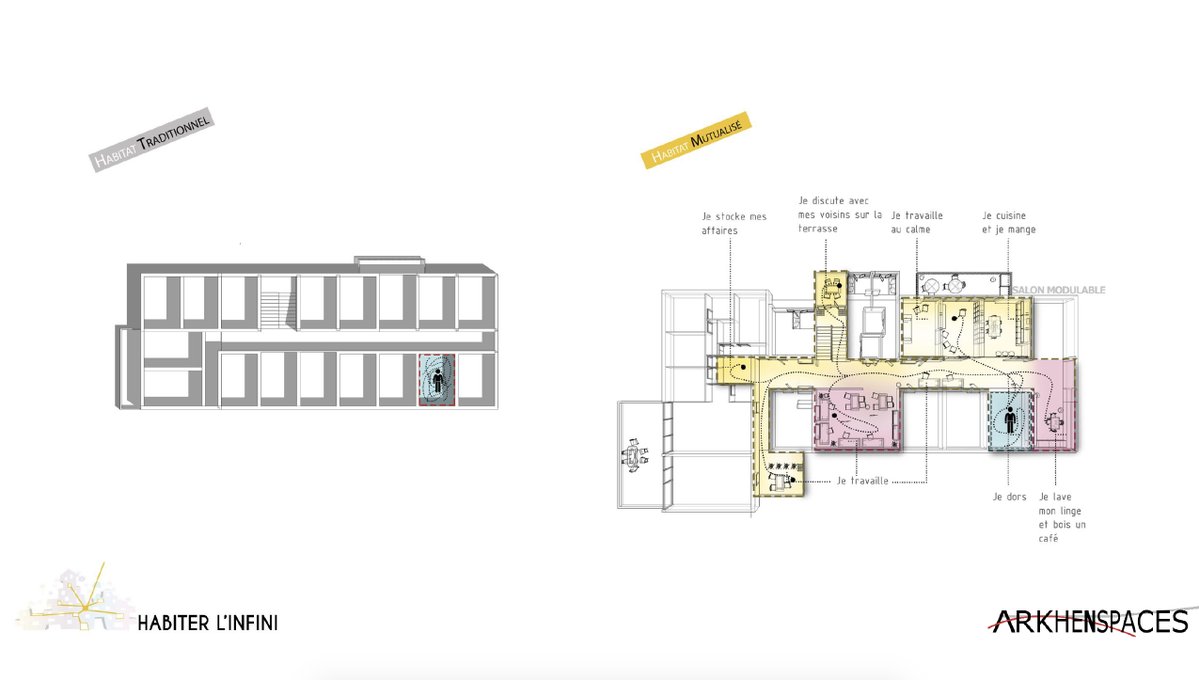 For example, a living room remains empty days on end. So consequently, why not temporarily lend this space for others to use? There you have it… break down each and everyone’s walls, for a relatively low price. And it’ll enable you to optimize a building’s operational costs, especially when it comes to energy. Not only that, it’s the answer to many big city’s housing crisis, enabling everyone to live to the max, densify local amenities, and bringing together different lifestyles from different generations in a really useful way.

This, of course, assumes that we’re ready to accept letting the “wall surrounding one’s private life” crumble. This wall has been built by the modern age, so Michel Maffesoli reminds us. It’s built by the individual, from rationality, and from a family unit that’s now reduced to a couple. The sociologist observes, however, that this wall is now porous. Here comes the age where the “eternal child” lying dormant within each of us awakens, and it’s eager for interaction, and less inclined towards all things useful and rational, rather than what’s emotional, fun and convivial. The modern chapter is coming to an end. Instead, a sort of synergy between olden times and modern day has taken its place. Tribes are reinventing themselves – smartphone in hand – and they’re ready to develop a concept of “We” that replaces the previous century’s “Me”.

As for this “We”, Caroline Reminy is trying it out on a daily basis. She has designed – and lives in – a co-living space. In practice, it gathers together several apartments that are occupied by a dozen or so residents. “This ‘we’ is quite simply those residents who’ve said yes to open-space living,” she explains. As an intrapreneur at VINCI, Caroline Reminy intends to bring this “co-living spirit” to life on a large scale, and is working on the Human Buildings co-living project, supported by Leonard. “Co-living is a reality that is ever-more apparent in call for tenders today,” she points out. “New small players and investment funds who are incredibly dynamic are getting in on the action, and it’s in major companies’ best interests to take note and explore.”

Taking the risk to reinvent housing

Could the “Endless Home” concept convince developers? Eric Cassar thinks so: “Certainly, housing remains a sound investment for investors. But, we should agree to take the risk to reinvent it. We should try out new things. We should be dreaming up living buildings, envisaging convivial structures and porous properties. We mustn’t forget that architecture isn’t just about what a building looks like, it’s about living inside it too. We have to discover the “we” in co-living, and digital technology is what’s making that possible.”