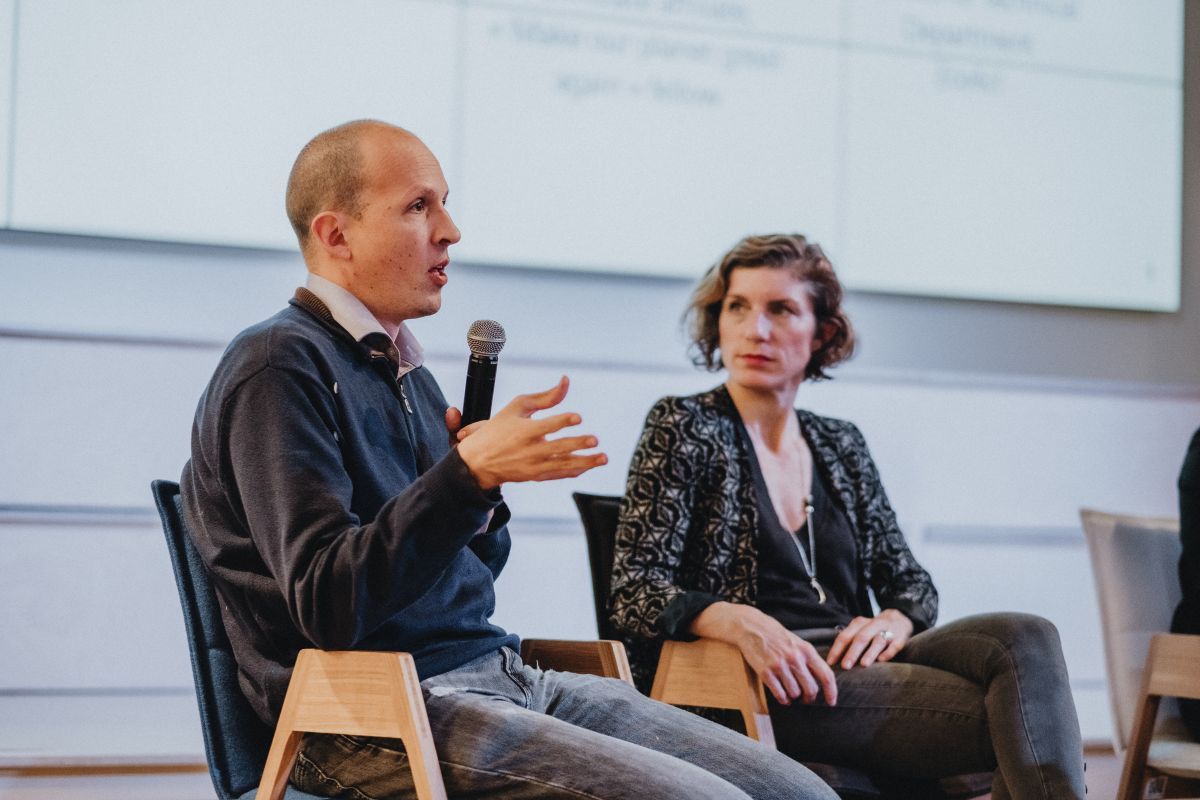 Thomas Lauvaux at the conference on metropolitan areas at the heart of the environmental transition, held at Leonard

In Paris, a pilot project aims to analyse concentrations of CO2 to provide continuous indications of the impact of climate plan measures. Simple enough in theory, but the practicalities of this form of greenhouse gas analysis are extremely complex in practice. Irrespective of the purely technical aspects, there is also the question of the experiment’s replicability in other French towns and cities. In turn, this raises the sensitive question of the gulf between financial and human resources that separate major metropolitan areas from smaller towns and cities. We discuss these issues with Thomas Lauvaux, scientific partner to the Origins.earth startup project and researcher at LSCE, the climate and environment sciences laboratory. He was, with Arianna De Toni (EcoAct), Karine Bidart (Paris Climate Agency) and Cécile Maisonneuve (Fabrique de la Cité), a speaker at the conference on metropolitan areas at the heart of the environmental transition, held at Leonard. This was the second conference in the series of environment events that runs until May.

Why create a continuous CO2 emission-tracking tool for cities?

Thomas Lauvaux: I think that most countries have by now become aware of the challenges of ecological transition. But acting quickly is hard at the national scale. Every decision is likely to cause major disruption to a whole series of economic and social parameters. This means it inevitably takes a long time to enact climate conference agreements. Working with cities means working on a smaller scale. Cities are able to carry out actions within their territories very quickly. It is far simpler to alter infrastructure, transport or heating methods to reduce CO2 emissions in a city rather than to require several industries to alter how they operate and create value at the national or even international level. City mayors have powerful levers available to them for changing the living and working environments of their residents. From a totally pragmatic standpoint, they have just five years to turn things around and hope for re-election on the back of their positive record in office.

But on the other hand, if you focus only on the available information, the balance tips somewhat in favour of states. States have entire teams who are focusing entirely on climate plans, along with the ability to commission comprehensive studies and also benefit from global studies from bodies like the Intergovernmental Panel on Climate Change. The data available to cities is far more limited. However, knowing the position at any instant is critical to the ability to devise policies. Our tool is not yet 100% operational, we’re still at the experimental phase but it does go some way to closing this gap.

Most big cities have already commissioned studies of their situation. What additional information can you provide them with?

T.L.: Information has several dimensions. Number one is the timeframe. As electoral mandates tend to be relatively short, city hall teams create five-year climate plans and retrieving the data is often complex. In France, for example, with a few exceptions there is no legal requirement on industrial companies or building managers to declare their activity’s impacts and energy use. This means data is collected piecemeal before being processed and formatted. It often takes four to five years before an accurate report can be produced.

The second dimension involves checking data and the theoretical calculations that are used as the basis for policy-making. By supplying snapshots for a given moment, we can provide data that increases the granularity of results and reduces margins of error. These are currently too large, as high as 30%, whereas decisions are sometimes taken on the basis of delivering a 3% cut in emissions. But we don’t set out to replace pre-existing information. Data retrieved in real time is, as I mentioned, an additional data layer that helps build models that are as close to reality as possible. The raw CO2concentration data we collect cannot be linked to a specific boiler that was replaced or cycle lane that was built. Greenhouse gases travel on the wind and gas concentrations vary depending on the layout at the location, and so on.

Lastly, another fundamental role of this form of real-time monitoring is to provide residents with information. The general public tends to find reports off-putting. But data is much easier to interpret when presented in the way that AirParif does. It also makes it easier to explain natural phenomena such as the fact that CO2 levels rise during cold years, which we can demonstrate in a concrete way.

Why is it hard to set up real-time CO2 emission monitoring?

T.L.: The first difficulty is pinpointing the source of CO2 emissions. This is the purpose behind our research, aiming to isolate external influences from outside city limits. In a city like Paris, no levers exist for reducing pollution from industries located on the distant outskirts. So we take account of wind direction and a city’s outlying environment, as this allows us to weight the readings and identify how much is generated by local CO2 emission sources.

Also – and we’re seeing this with the imminent arrival of RE2020 rules for new builds – grey energy in buildings and infrastructure is a big issue. But CO2 emissions from producing or recycling materials do not show up when we take our snapshot, nor do they have any impact on the city itself. It is important to understand that we offer a very accurate tool, but one that must be used in conjunction with other types of data.

The tool will be rolled out first in Paris. Is it transposable to other French or European cities?

T.L.: There isn’t a Yes or No answer; it’s more complex than that. To adapt this monitoring model to a particular city we need access to additional data, which implies having the resources needed to obtain this data. Today, the world’s major cities tend to be members of international organisations. Paris is part of the C40 Cities Climate Leadership Group, which gives it access to advanced tools and analytical capacities. Because of its wealth and size of population, Paris can also employ a team to design its climate plan. But the situation is very different in a city like Marseille. Even a city of this size lacks the appropriate data-processing resources. This is why supporting France’s cities to make ecological transition a reality is so important, and this is where state support is needed. Depending on the country and the criteria used to define a major city, no more than 20% to 30% of people live in mega-cities. This means that one of the challenges to transition is extending actions to reach the remaining 70% to 80% of people.

Do many French towns and cities have climate plans?

T.L.: I’ll leave that up to the specialists to answer in detail, but my experience is that most French towns and cities acknowledge the scale of the problems they face and have set out their roadmap. But rolling out a plan requires an analysis of the current situation, which in turn relies on the availability of the initial data. And even where the data does exist, we often face problems of consistency. For cost reasons, small, medium and large French towns and cities hire different consultancies that each use different methodologies to make their calculations. Once you start comparing reports you realise that some data is duplicated and other data is lacking entirely. I’m not pointing a finger at the work consultants do, it’s about making the right decisions, and these can vary: in terms of the energy needed by a building, where are the emissions assigned, to residents or boiler plants? Which greenhouse gases should be considered, which sectors need to be integrated into the calculations, etc.

At present, one answer to these difficulties has come from the arrival of major groups like Suez, which is partnering the Paris project. They can often help towns and cities with their climate plans as an add-on to their other services. And because groups like this operate in many different towns and cities, they have a very broad-based vision of the methodologies to use and provide a relatively stable analytical framework that can be tailored to specific cities relatively cheaply.