Intrapreneurship first came about in the 1970s in the United States. The concept allows employees to develop innovative projects on their own accord, in the way a startup does, while operating within the organization’s setup. The approach is having a growing success, and it’s particularly favorable to the emergence of new solutions to the challenges urban landscapes face today and tomorrow. Here are the portraits of five guest intrapreneurs at Leonard:Paris Building Beyond festival, and what they have to say on the matter. 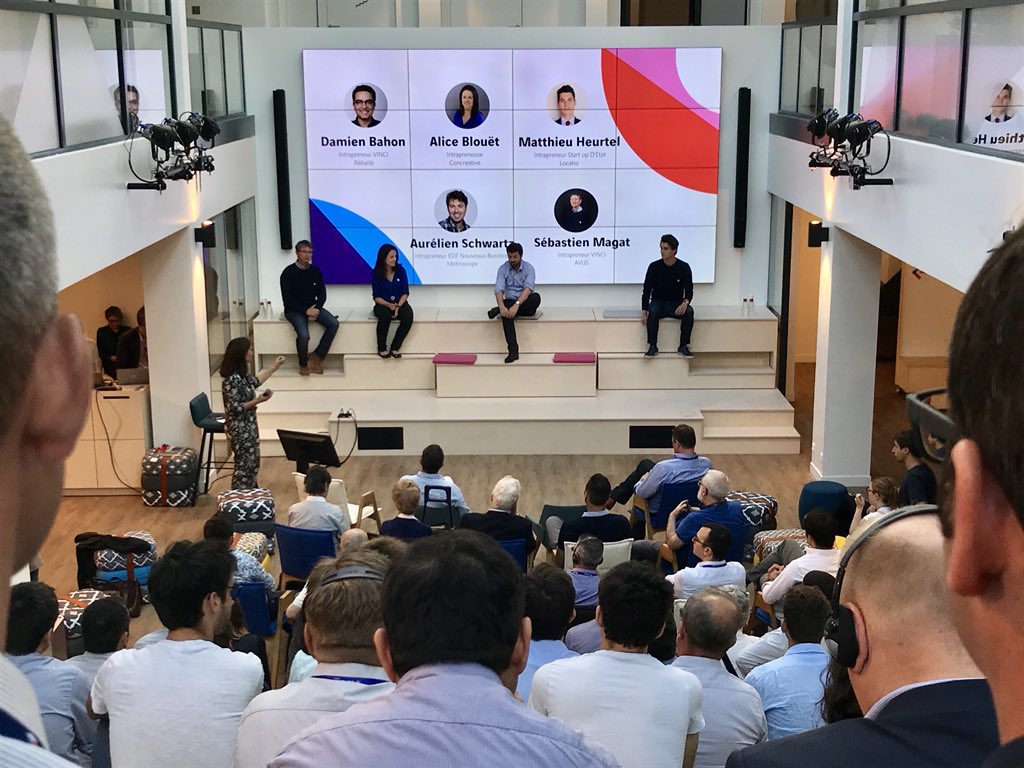 Aged between 26 and 45, one civil servant and four employees, these five intrapreneurs were invited by Leonard as part of the Building Beyond festival to talk about how they got into intrapreneuring: Matthieu Heurtel, public sector startupper and former employee at the French Ministry of Territorial Cohesion; Damien Bahon, Sébastien Magat and Alice Blouët, intrapreneurs at VINCI for Leonard Paris; and Aurélien Schwartz, intrapreneur at EDF Nouveaux Business. So what do they all share in common? Each identified a need where solutions were lacking, and suggested to their employer to launch into the development of an innovative tool in answer to that need. But rather than working on their project in a traditional hierarchical organization, they had been sent away on a temporary assignment, enabling them to develop their tool independently, just like as a startup would. This flexible business model lets employees-entrepreneurs’ imaginations and creativity run free, and could help build some of the solutions to challenges facing tomorrow’s cities.

More than just a job title

“When you first get into intrapreneuring, you become a general manager, operations manager, HR manager and head of communications overnight,” explains Alice Blouët, who works on Concreative, a concrete 3D-printing solution which is, for now, destined for future building sites in Dubai. “You need to be ready to be several people at once and go beyond the basic role of a project manager, because you often work alone.” Like 20 other collaborators with the VINCI Group, Alice Blouët carries out her project autonomously, and with support from Leonard, from within the group’s platform dedicated to innovation and foresight…

After the incubation phase, her project in development undergoes the next step, known as the accelerator period, before leading into the creation of a new and promising activity linked to concrete 3D-printing, within the VINCI Group. “From the design diagnosis to the project delivery via the actual printing stage and the assembly, Concreative can be a future solution for construction sites of tomorrow,” concludes Alice Blouët.

Damien Bahon is another VINCI intrapreneur, although he works on Rehalib, an augmented reality app that could truly turn the approach to housing renovation projects upside down. “The aim of our software is to give all those actors involved the possibility to see how housing can evolve and interact thanks to augmented reality,” presents Damien Bahon. “Today, urban renovation operations kept far away from the latest innovations, simply because they haven’t been made using a 3D model deemed expensive and time-consuming. Thanks to our tools, developers, architects and the general public are able to visualize and decide together what their future neighborhood will look like.”

Space to breath for the sake of creative gains.

And it’s in the same flexible and independent vein that Aurélien Schwartz (at EDF) and Matthieu Heurtel (at the French Ministry of Territorial Cohesion) have benefitted from the necessary time and support needed to develop innovative applications. Along with two other colleagues, Aurélien Schwarzt created Metroscope, a diagnostic tool to make industrial maintenance easier. Meanwhile, Matthieu Heurtel worked with developers on Locatio, an online tool created to restore confidence between renters and landlords. “Our project is progressing because the state agreed to give us the space needed to let us work at our own pace as intrapreneurs with full responsibility,” explains Matthieu Heurtel confidently.

Of course, an intrapreneur’s aim is ultimately to see a project result in the creation of a real business unit or a startup that would fit closely with the activity as well as the way in which it operates. Aurélien Schwartz’s Metroscope is now entirely a subsidiary of EDF, and has doubled its number of collaborators since the beginning of the year. Since developing AVUS, a digital platform for underground networks systems maintenance, during six months as part of Leonard’s program, Sebastian Magat is about to test his tool for real in the east of England. It’s the final stage in the life of an intrapreneur. Whether success comes or not, it’s the opportunity to raise your skills and test your audacity.