For the second Building Beyond Festival, Leonard, La Fabrique de la Cité and the Fondation VINCI pour la Cité brought together 70 city makers, researchers, architects, engineers and artists for two weeks to consider the size of cities and imagine the future of regions and infrastructure.

Fine particulate matter, carbon monoxide, repeated pollution episodes, and so on: air pollution is a public health challenge and an eminently urban problem, with the concentration of traffic stimulating numerous crises. What is the best way of analysing the phenomenon in order to prevent future pollution spikes? And what solutions should be implemented to improve air quality in the street and inside buildings?

“Air inside buildings is five to 10 times more polluted than the air outside,” observes Lamia Mallet, founder of Cozy Air. “That pollution costs almost €19 billion and 12,000 lives a year. It also has a not insignificant impact on a building’s sustainability, leading in particular to increased maintenance costs.” Based on this observation, Cozy Air proposes a device with a built-in sensor for each pollutant and each non-hazardous gas that could have a negative impact on people’s concentration, such as CO2. Office space is a buoyant market for tracking air quality, with 700,000 million square metres of existing buildings, and growth of 4 million square metres a year. The Cozy Air device detects pollutants with a view to adjusting ventilation and maintenance based on indicators. It can be connected to other objects, such as air conditioners, to help reduce energy consumption. In the longer term, Cozy Air aims to make maintenance predictive thanks to its device. 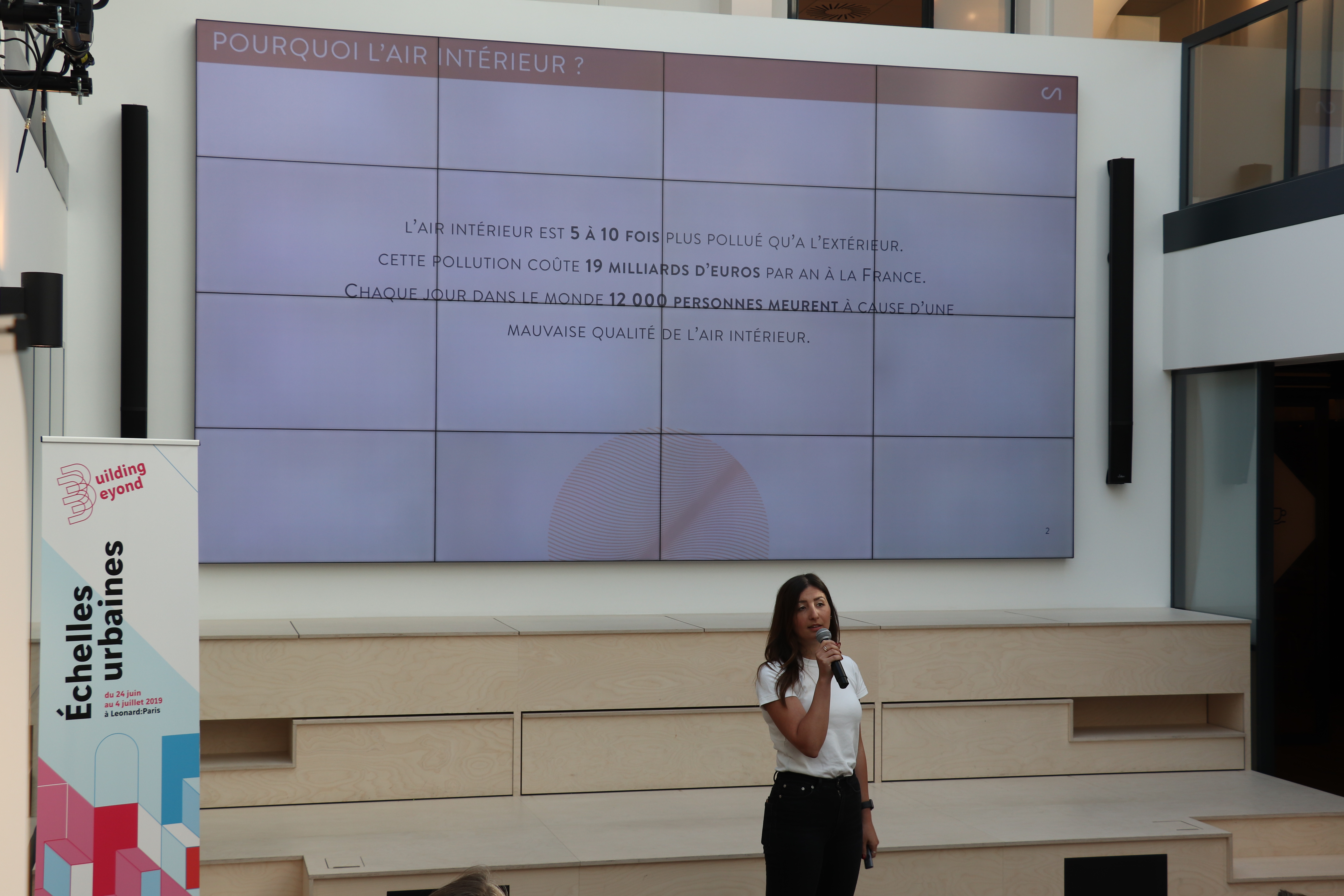 “The problem with air is that it’s invisible,” says Frédéric Mahé of Aria Technologies. “However, with modelling, we can not only make it visible but also easier to understand.” Streets, for instance, may be more polluted due to the proximity of buildings, which prevent the pollution from being dispersed and create a “canyon effect”, easily identifiable by the tools of this modelling company, which feeds data to all players working on air quality. The company is participating in the DIAMS project in the greater Aix-Marseille urban area, which aims to bring the silo mentality of the industry to an end and create a sensor together that works to everyone’s benefit.

For Jaouad Zemourri, “From a physics point of view, all molecules are noble.” This former physics teacher has created Starklab, an air pollution treatment company with an impressive product: the Terroa, which eliminates air pollution by bringing it into contact with water and making it boil. This changes the particulate matter from an almost uncontrollable mass of air pollution to a low volume of treatable water. Sometimes the process enables recovery of precious elements such as molecules of gold. The treatment plant can treat smoke, recycle certain products or even reinject treated water for use in industry. The product is currently being trialled at the Hoche plant and can treat up to 1 million cubic metres over a surface area of 15 metres by 2 metres.

The MVAW Technologies solution, presented by its founder Vincent Fesquet, is also an air treatment process that uses a substrate filled with micro-organisms that filter fine particulate matter. This solution can be deployed as part of the street furniture or on building façades. The substrate may later be planted. 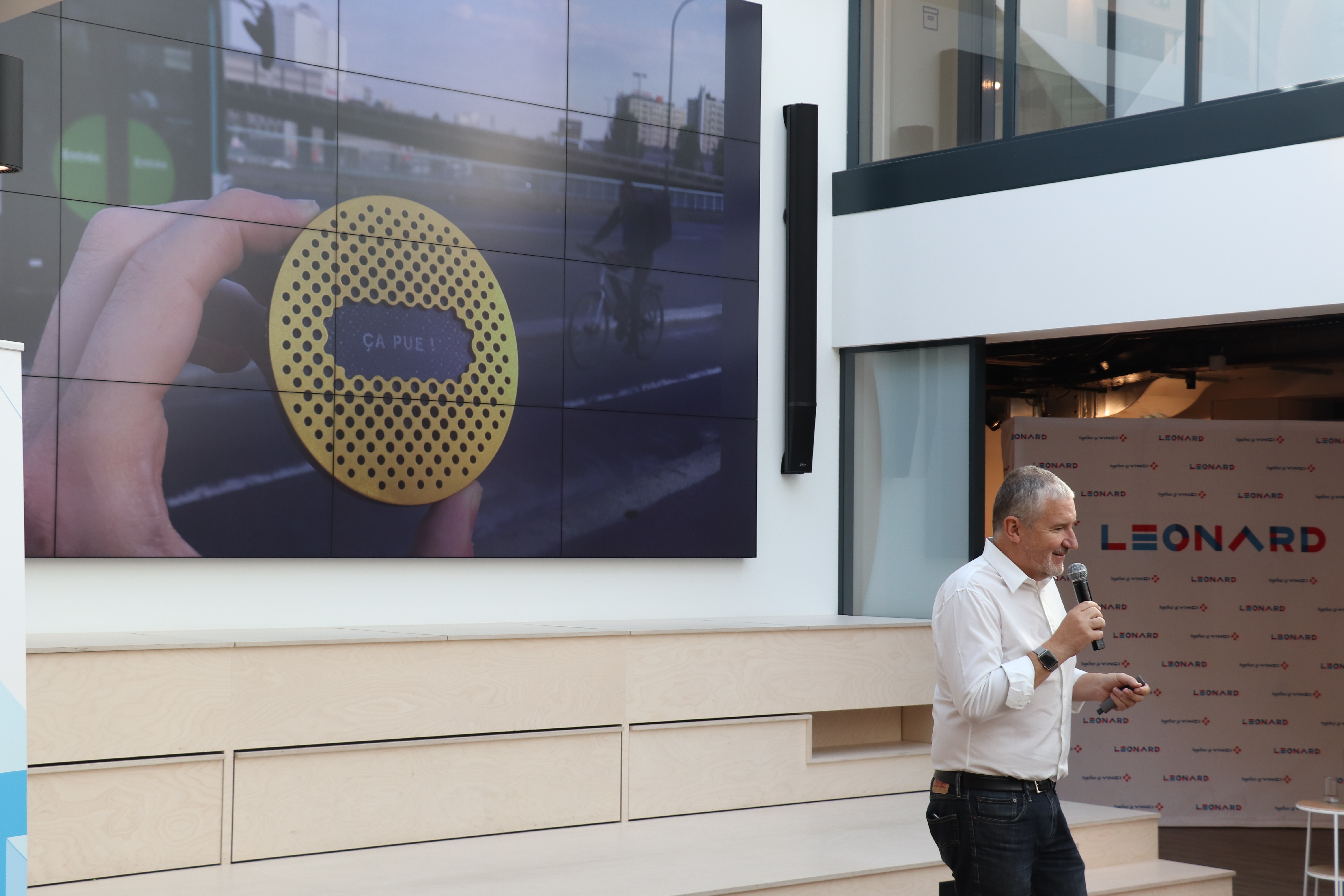 Jean-Louis Fréchin, fondator of No Design, presenting the AirO project

A fun object for raising awareness and initiating discussion

Jean-Louis Fréchin, designer and founder of NoDesign, decided to stimulate discussion using AirO, a fun, connected object. The product is simply a badge consisting of sensors and a screen. When the sensors detect too much air pollution, the screen shows shocking but clear messages such as “Boy, that stinks”, “I can’t breathe” or “Run for your life!”.

The aim of the device is to bring the debate into the public arena. It is accompanied by an application that detects the level of pollution around badge wearers and explains what has been measured. The idea is to create a Waze, a sort of evolving map of air pollution, both in buildings and outside.