Ecological transition: “growth will not be grey”

Leonard’s Building Beyond festival welcomed the president and managing director of VINCI, Xavier Huillard, as a guest to discuss the quasi-existentialist topic “Transitioning towards greener jobs, cities and regions”. Alongside side him were two other panellists: Christian de Perthuis, a specialist in the economics of climate change, and Virginie Raisson, the director of LÉPAC (Laboratoire d'Études Prospectives et d'Analyses Cartographiques, or Foresight Studies and Cartographic Analysis Laboratory).

“Business is part of the solution”

Opening the conference, the geo-political scientist rolled out the alarming, yet lucid, state of affairs which the planet currently faces: Covid-19, economic recession, political and of course environmental crises. “These issues all share one characteristic: they are all linked to our economic model,” she points out, calling for new indicators to be found, which take a better account of the impact on the biosphere.

Despite the construction and transport industries – which are central to VINCI’s activities – being among the sectors which emit the most carbon, Xavier Huillard appears a little more optimistic. “We are part of the problem. However, we believe we are also part of the solution. Business is a problem-solving machine.”

The industrialist thinks that economic actors became aware of this in a short space of time and took action pretty soon afterwards. Oil companies are now committed to change, even encouraged by the world’s largest investment funds, which send out letters of recommendation each year. The CEO explains how his group, which employs more than 200,000 people throughout the world, positioned itself in favour of an “overall performance” approach over a decade ago. This approach does not sacrifice social and environmental impact over technical and financial performance.

“The era when companies consider their objective being to serve shareholders is over. Finished. It’s not about having financial performance on one side, and CSR performance on the other. It’s the overall performance, or no performance. Our shareholders share this stance. They have accepted that this is how we shall ensure our sustainable future.”

Xavier Huillard has confidence in companies’ capacity to innovate and wants to avoid the pitfalls of overly heavy state regulation. “Since COP21, which was the first time companies were invited to attend, we have shown that the fight against global warming and economic growth are compatible.” He believes that the Covid crisis will act as a catalyst for change, providing an opportunity to mobilize all those across the planet pushing for change. 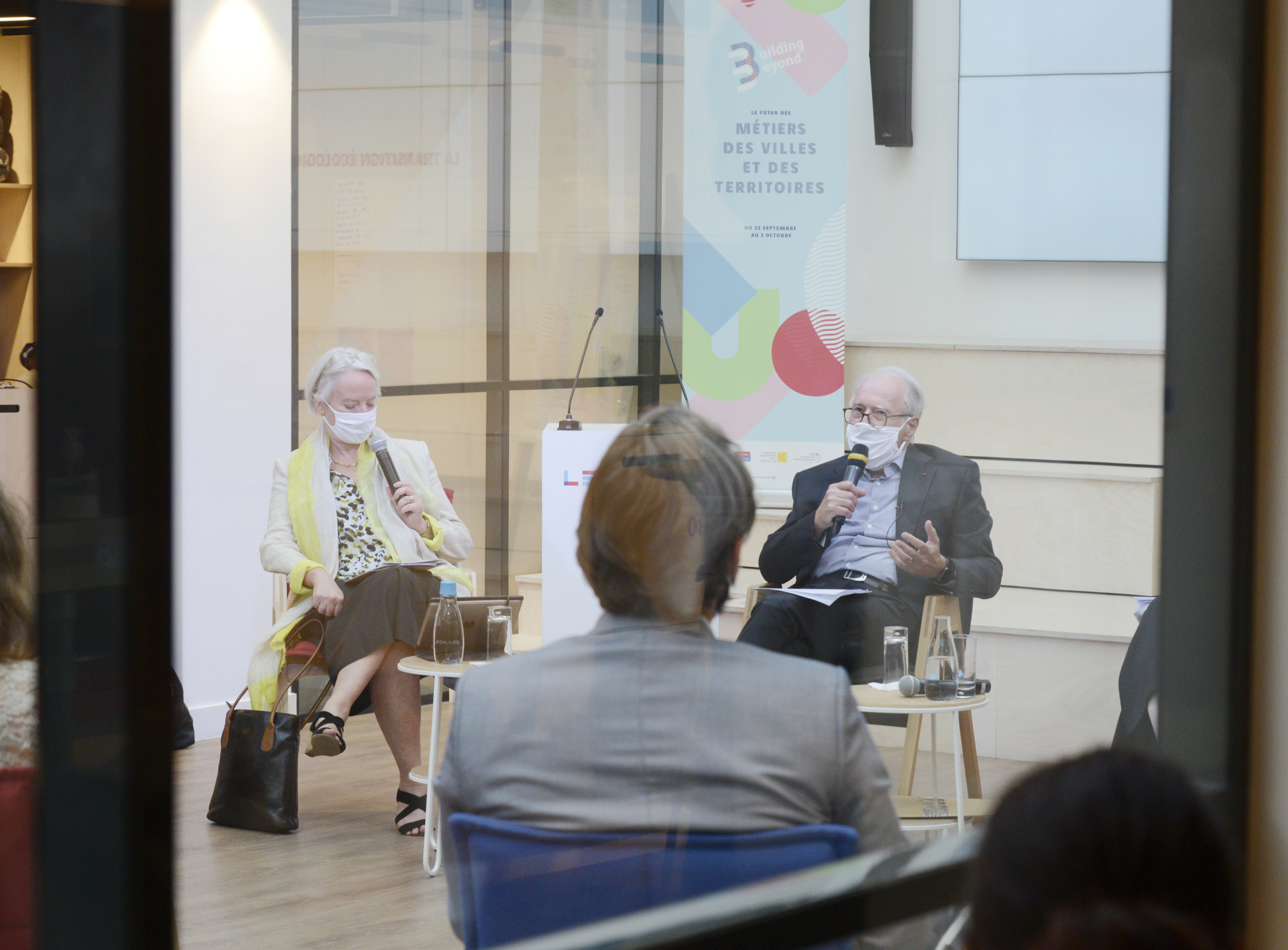 While Christian de Perthuis is in agreement with the latter statement, he insists we must act urgently. “Change is happening far too slowly to put us on track for the 2-degree scenario. Acting fast has a very important impact on public opinion and businesses, but economic instruments are needed in order for change to happen. It’s unfortunate that when the price of oil drops to $40, we don’t take that opportunity to tax fossil fuels, because otherwise we risk an increase in consumption. We need both state public action and decentralised action.” He then replies to a question by adding, “If you want less standards, less bureaucracy, CO2 must have a price. This is the real justice of the peace.”

A young works engineer present in the audience questions the compatibility between economic growth and reducing greenhouse gases. Christian de Perthuis remains cautious: “I think that it really depends on the context. I have zero doubt that the ecological transition offers a fantastic window of opportunity for development for under-developed countries. However, it is very expensive for countries dependant on fossil fuels: stranded assets means that capital must be destroyed.” Just look at Russia, Algeria and, of course, the United States.

“Part of the economists’ community continues to reason as if we could count on fossil fuels. Yesterday’s growth, based on fossil fuels, has no future. The best way to go towards degrowth is to continue yesterday’s model. I am not a green growth tyrant, but my belief is that growth will not be grey. 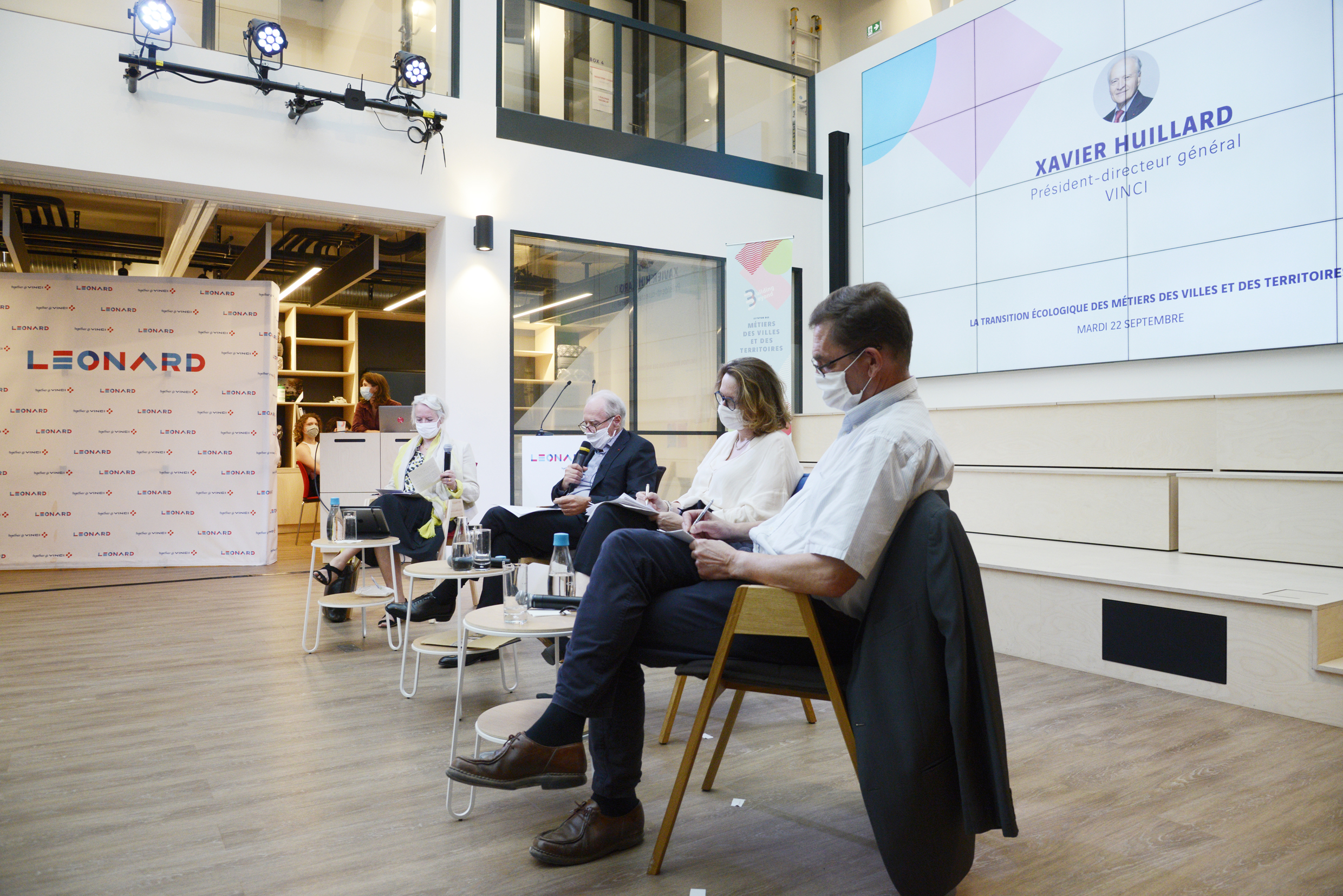 In order to reduce its greenhouse gas emissions, VINCI has set itself a target of reducing its carbon footprint by 40% by 2030, and aiming to be carbon neutral by 2050. In order to achieve this, the group is focussing on various innovations, such as new low-carbon concrete from Exegy, or roads designed by Eurovia made entirely from recycled road materials. Apart from the commitments made, which relate to VINCI companies’ direct emissions, the group is helping to reduce its scope 3 emissions, or rather, its indirect emissions. This is where the main challenges lie in completing the ecological transition.