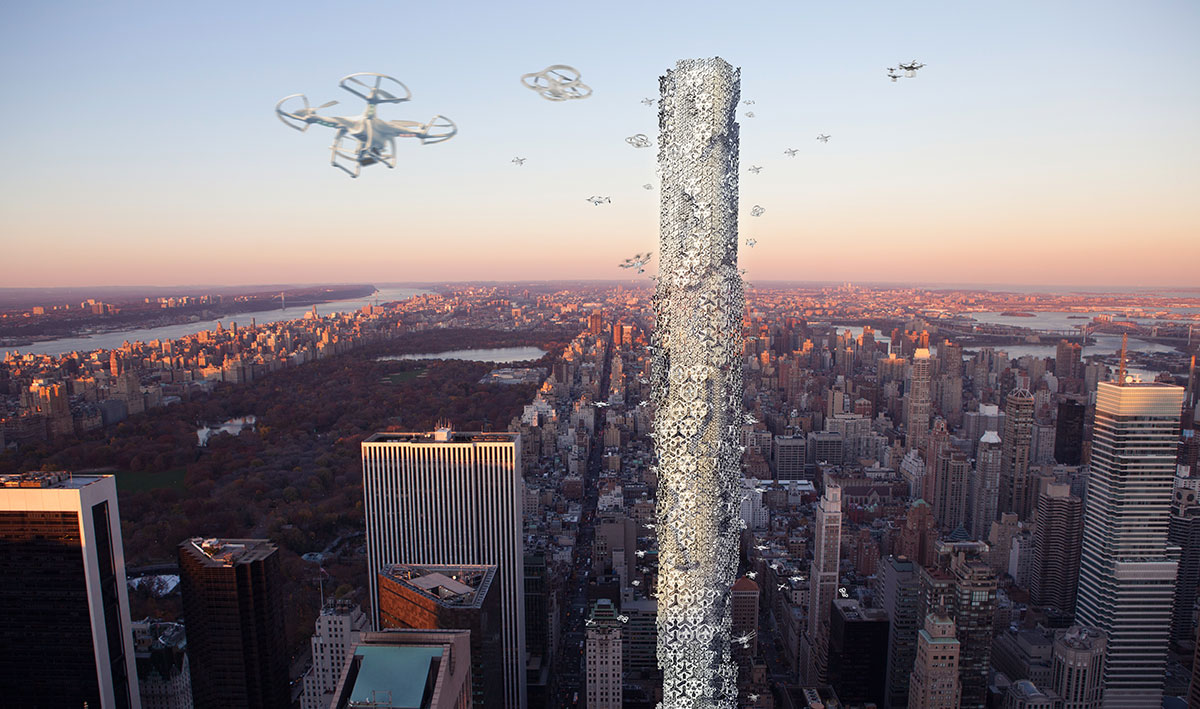 The Internet of Things. Or rather, connected sensors. They record pressure, voltage, temperature, luminosity, photos and videos. They transmit to other objects and computers via radio, infrared and power lines, using protocols invented for the internet. They’re found in buildings, household appliances, heavy machinery, trains, metros, train platforms… These micro-elements make up the urban world’s central nervous system.

Artificial Intelligence. The most well-known variety (as it appears in differing algorithmic forms) is the deep neural network. Their use is widespread, especially for automatic image recognition systems. This technology is useful for making things autonomous, like machinery on a worksite, to recognizing vehicles on the road, or identifying risk behaviors on the platform of the metro.

Replace the printer head on an office printer with a robotic arm like one found in dozens of automobile construction factories. Now replace toner (ink powder) with concrete or powdered metal that’ll be melted on the spot and made on demand. And there you have a 3D “printer” capable of bringing to life structures that are impossible to build by assembly or traditional formwork, all while using a lot less material.

On building sites, by using integrated cameras or lidar (a sort of radar that uses light), you can compare in an instant 3D mapping with the actual state of work. Maintenance on a building in progress can be refined and sped up. Tomorrow, they could make urgent deliveries faster (such as medicine deliveries), or even help transport passengers.

Building Information Modelling. Or rather, thanks to progress in micro-processors and the handling of huge volumes of data, the possibility to build a complete digital replica of a building and all its furnishings, and share it with other users. It’s the ideal way to check and optimize an infrastructure’s performance, security equipment and… map traffic in a city.

Augmented Reality. With a basic smartphone or special glasses, augmented reality consists in showing invisible elements over an image of an object or a place filmed live. For example: instructions for a technician during a work operation, new equipment for rehabilitation, underground networks for controlling electrical grids under public roads…

Virtual Reality. Before the construction phase, virtual reality is used to map the future building, its dimensions, its look, its environment and infrastructure. Imagine its impact on tender applications, negotiations with end client, facilitating collaboration between stakeholders….

The physical aspect on a worksite remains large. Facing difficult working conditions and the level of risk, exoskeletons (smart shells that the worker “enters” in) allow a worker to carry heavy loads and repeat the same task without putting their physical health in danger.